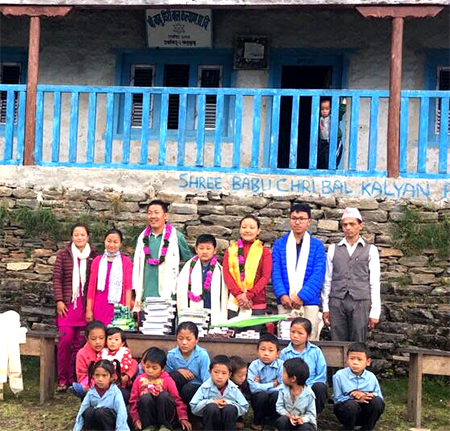 Babu Chiri sherpa is acknowledged as one of the strongest climbers in the Himalaya and famous mountaineer in the world. He held two world records on Everest. In Spring 1999: Babu spent over 21 hours on the Summit Mt Everest without auxiliary oxygen (still the record )and set the speed record for climbing Everest on the South Side in 16 hours and 56 minutes, the following year. Unfortunately, on April 29, 2001, Babu Chiri Sherpa died on Mount Everest, as he attempted his 11th summit.

Babu had a dream to build a school in the village where he was born, Taksindu Solukhumbu Nepal so that his six children and other children of the village would have the opportunity to receive a formal education. This dream was realized. He was an environmentalist and humanitarian and worked hard to build the school. The school is now functioning with 2 teacher and students with class grade ranging from 1 to 5.

The teacher has to walk 3 hours everyday to reach school from his home as there is no room or living area available for them near the school. Education is crucial for everyone. But along with it, access to infrastructures and technology is equally important. Shree Babu Chiri Balkalyan Basic School was established in 2000 where it holds the future of 25 students, career of 2 teachers. When Dali Sherpa and Mingmar Sherpa went to visit the school in June of 2017, they brought along copies, pencils, pen etc The students seemed really happy, but the couple realized that the school needs more help. Dali, who is second Daughter of Babu Chiri Sherpa received a letter from principal of school sharing his problem about the school and asking for help from her. . We want to build a hostel room for the teachers so it will be easy for them to reach school.

Why were we silent?

After the death of our father, our mother Ang Futi Sherpa took care of all her 6 daughters by herself. Without getting education herself, she couldn’t much open the door of career, but she was fixed to give good quality education to her daughters. From our family no one had any knowledge or experience to help further develop the school built by our father. But today, all daughter are grown up, two of them are married, and. Four of them are going to college in United States. It is never too late. The school is where is stands but it needs help. We have been planning to build the foundation for quite a long time and finally we are taking steps to achieve the goal. We hope to get help and support for the good cause.